Janis Sandlin, Owner and Founder of Surf’s Pup Doggie Lounge, came up with the concept of Surf’s Pup in her previous life practicing medicine as a Physician Assistant. For the last decade she practiced in several specialties including Trauma, Acute Care Surgery, and Emergency Medicine.

When it came time to do something to take care of herself (like surfing!) her pup Mystertee would look at her with sad eyes wanting to join in on the day off, but where would he be safe for an hour or so while she surfed? If only there was a place he could hang out at safely right by the surf break…..by the end of 2018 she found herself so severely burnt out from working in healthcare that it nearly took her life, so she quit medicine. She officially retired from healthcare in April, and in July of 2019  Surf’s Pup Doggie Lounge was born!

So what is Surf’s Pup Doggie Lounge? It is a Lounge, for Doggies to hang out in! Surf’s Pup operates out of a Sprinter Van that has been totally converted into a tiny home, but for Doggies; aka The Doggie Lounge! As a previous working professional, Janis knows first hand how hard it is to take care of pets while also taking care of yourself, so the overall goal with Surf’s Pup is to help other people take care of their pets while they 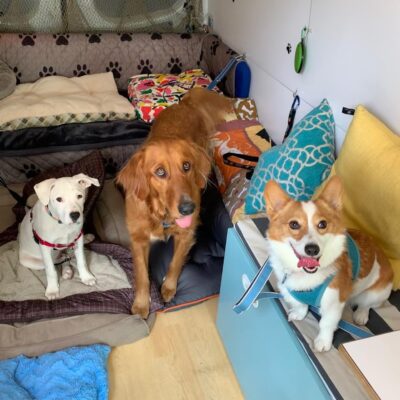 simultaneously take care of themselves. We offer hourly Doggie day care, starting at $15/hour, for pups to chill in the Doggie Lounge while their owners are out playing themselves. All of our Doggie guests are provided with fresh water, organic doggie treats, climate control and of course lots of love and snuggles. Surf’s Pup also carries all kinds of Doggie clothing and apparel including Doggie Trucker Hats, hoodies, and Doggie tee shirts! So if you are heading out for a surf, a beach day, lunch, brunch, dinner or the market bring your pup and let them Lounge safely while you go play!